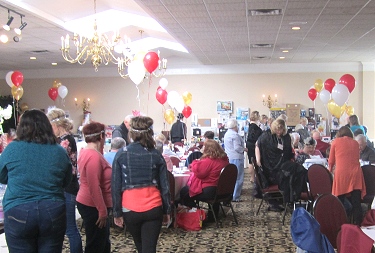 Sweepstakes Conventions are held across America every year. They usually have classes teaching the latest winning strategies to give you that extra edge, as well as prize sessions - in which they give out prizes for the attendees. It tends to be like an extended family reunion - as usually 50% or more of the people have attended one or more conventions in the past. Usually 70% of the attendees tend to be 50 years or older, with the majority being female. It is a place to share winning strategies, share your winning stories with other like minded individuals, or learn how to win more. Each convention tends to consist of prize sessions, raffles, super raffles, and speakers.

The National sweepstakes convention is held once a year, and is the largest sweepstakes convention in the USA every year. There are usually between 700-1000 attendees, range from 4-7 days, and held at interesting or exotic locations. It is best to book early, because spots tend to fill up quickly. The 2016 Convention (from July 28th-31st) was held in Las Vegas.

The 2017 Sweepstakes Convention will actually be held on a cruise ship, from September 23-30, 2017. It is the Norwegian Escape out of Miami 3 days at sea (which will be the convention days) with stops in Tortuga, Nassau & St. Thomas. The official 2017 Sweepers Escape Convention page is here: http://www.sweepersescape.com/.

In addition to national conventions, many important people within the sweepstakes community (those people recognized for having a lot of successful wins, or helping other people win a lot) will host sweepstakes conventions. They are usually organized by state, with people from surrounding states attending. Attendees tend to range from 75-200 members. The mini conventions, in order of popularity, tend to include the following:

All conventions tend to follow a very similar format. They consist of the following:

Overall, conventions (both the national and mini conventions) are a great way to meet new people, and share winning stories.